Ingelia S.L. participates in the strategic meeting of Climate Kic Spain in Valencia 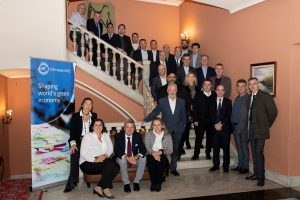 Valencia, December 5-Last December 4, a small group of experts, including the Valencian Marisa Hernández representing Ingelia SL, participated in the strategic meeting of Climate-KIC Spain. It has taken place at the Hotel Balneario Las Arenas.

Climate-KIC Spain, since 2016 and based in Valencia, promotes the challenge of the new model of sustainable economy based on competitiveness, economic growth and the generation of green jobs. It belongs to the European Climate-KIC initiative, one of the knowledge and innovation communities (Knowledge Innovation Communities) promoted by the European Institute of Innovation and Technology (EIT).

The objective of the meeting was based on the presentation by Climatte-KIC Spain of its actions to promote the sustainable economy, as well as the debate on the part of the participants of the present and future actions they carry out for innovation, training and entrepreneurship in Spain. The meeting was completed with a dinner-debate with a select group of “stakeholders” from Valencia and Spain.

CLIMATE KIC and its consolidation in Spain

Climate-KIC has its origin in 2010 and has about 200 partner organizations, including universities, research centers, companies and public entities. It is integrated by a network of offices in Germany, France, the United Kingdom, Italy, Switzerland, the Netherlands, Denmark, Poland, Belgium, Hungary and Finland. In addition, activity support is also offered in Portugal, Ireland, Norway, Malta, Cyprus, Estonia, Latvia, Romania, Slovenia and Bulgaria.

In 2016, Climate -KIC Spain was presented in Madrid with an important representation of the Spanish innovation ecosystem with the support of the European Commissioner for Action for Climate and Energy, Miguel Arias Cañete and the Secretary of State for Research , Development and Innovation of the Ministry of Economy and Competitiveness, Carmen Vela.

The mission of Climate-KIC Spain is to promote the development of a low carbon economy with the aim of facilitating actions to adapt and mitigate climate change. Its lines of action are the training of people to innovate and undertake; the promotion of innovation in the company, universities, research centers and public administrations, as well as the application of talent and knowledge to provide solutions to the challenge of climate change, through new products, services and business models

Climate-KIC Spain promotes the challenge of the new model of sustainable economy based on competitiveness, economic growth and the generation of green jobs, in collaboration with the European Institute of Innovation and Technology and with the support of a community of prestigious partners and solvency. They work with their partners to advance in the consolidation of an innovative Spanish ecosystem.