The company Ingelia S.L. is in luck. The Valencian Marisa Hernandez as the visible head of Ingelia, has received the award for “The best Bio Industrial Initiative”, one of the awards granted by BIOVAL, a cluster that represents companies, organizations, entities and institutions linked to biotechnology, biomedicine and bioeconomy in the Valencian Community.

The Bioval awards event is undoubtedly becoming the annual reference forum for the Bio sector, claiming the Valencian Community as a benchmark in the areas of biotechnology, biomedicine and the bioeconomy.

An event that took place last night at the “Palau de les Arts” and attended by more than 300 people, including representatives of the business world, entities, research centers, universities and Public Administration. The awards ceremony was attended by the general director of Ivace, Julia Company; the Autonomous Secretary of Agriculture and Rural Development, Francisco Rodríguez Mulero and the CEV president, Salvador Navarro among other authorities.

Twenty-seven companies had submitted their candidacy for these awards that aim to recognize the excellence of the BIO sector in the Valencian Community. In addition to being Ingelia awarded in the category of “The best Initiative BIO Industrial”, other companies received different awards. The recognition for “The best Biotech Startup” has been for Agrozono, the award for “The best BIO Initiative in Agri-food” has gone to Bioinicia and the company EpiDisease has received the award for “the best Initiative Bio in Health e”.

Ingelia sells and installs industrial facilities applying the Hydrothermal Carbonization technology, which, starting from biomass and organic waste, obtains biochar pellets. It is contributing to the development of the Circular Economy. Its business model as an opportunity to convert each biowaste treatment into a profitable and sustainable business, and its expansion plan, has once again earned recognition in the Bio sector. 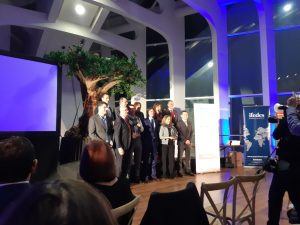