Ingelia S.L. sets up a new HTC plant in England

The company Ingelia S.L. continues expanding and deploying its business plan in Europe. Specifically, in Immingham (United Kingdom), the first commercial-scale hydrothermal carbonization (HTC) installation is underway. The installation, which began its production in 2018 with a first reactor to carbonize “food waste”, will be enlarged with three additional reactors in a second phase.

It´s the first example of HTC technology in the United Kingdom at industrial scale and has been built in the facilities of the company CPL Industries, shreholder of Ingelia S.L. The Valencian company has built the plant under the modality of a turnkey contract. The investment of two million pounds for the plant has been made by the British Government in collaboration with the University of Nottingham through the Energy Research Accelerator (ERA) program. An initiative funded by Innovate UK that works with universities and the industry to promote innovation and research within the energy sector. The contract was awarded to Ingelia S.L. in January 2017 after three months in European tender for its award.

Undoubtedly, this new project in the United Kingdom will be a model to follow in a sector where waste management is arranged selectively including penalties in cases where the user doesn´t separate the garbage correctly.

CPL is Europe’s leading manufacturer of smokeless solid fuels, with a capacity of 500,000 tonnes per year.  It has manufacturing capability in both the UK and Ireland and makes a significant investment each year in research and development to ensure its products remain cutting edge.  In particular, CPL is making significant efforts to develop bio-fuels through the use of technologies such as hydro thermal carbonisation and torrefaction.  This will enable CPL to offer products to the market which maximise the use of waste products.

CPL Industries is Europe’s leading manufacturer and supplier of smokeless solid domestic fuels and already has a number of products on its range that include a proportion of biomass, including Homefire Ecoal 50, Olive Briquettes and Supercharged Heat Logs.

The HTC process converts ‘green’ biomass waste, with a high moisture content, into a 100% renewable ‘biocoal’, which can be incorporated into our other smokeless fuels produced at Immingham.  Suitable feedstocks include garden and agricultural waste, food waste and digestate from AD biogas facilities.  The HTC process uses moderate temperatures and high pressures to convert the green waste into a biochar, effectively mimicking the long-term natural formation of coal, but in a process that takes hours rather than millennia.

CPL team are promoting this alternative route for biomass recycling via various waste industry conferences and exhibitions, including the Food Waste conference in London and the RWM (Resource & Waste Management) exhibition at the NEC, Birmingham. 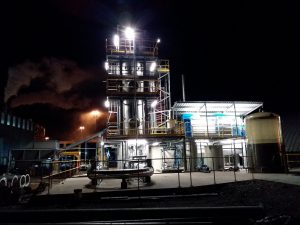