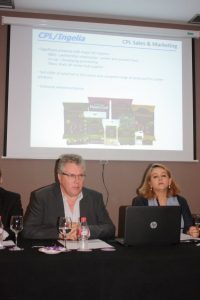 Ingelia and the multinational coal distributor CPL Industries informed in a press conference on October 28th, the terms of the business agreement recently reached by both parties. Under this alliance, the British giant have obtained 10% of Ingelia and will be responsible for most of the marketing in Europe of the ‘black pellet’ that Ingelia is producing at its plant in Náquera that now is being expanded with a second reactor. Moreover, the British corporation gets the permission to develop, under the direction of engineering and supply of Ingelia, the HTC technology (hydrothermal carbonization), and build new HTC plants in England in a first phase and most likely in a second stage, in Ireland, France and Germany. The new three reactors and the promotional efforts of the new product will involve an investment of at least 4.2 million euros. If three other plants under study are confirmed, the amount could rise more.

“The agreement is beneficial for both parties: CPL Industries brings its financial muscle to implement this technology and its commercial network, with over one million deliveries a year to over 100,000 customers we have, mainly in England and Wales; and Ingelia brings a new product with great potential but needs to be known, with 30% more heating power than conventional wood-pellets. Especially, its patent-edge will be key to strengthening the activity clean and smokeless of our affiliate CPL Renewables, “said Chief Executive Officer (CEO) of the British coal giant, Tim Minnet.

For his part, the CEO of Ingelia, Marisa Hernandez, stated that this agreement “the HTC techgives the international break he needed to run as a source of sustainable and competitive energy reference, which we hope will be decisive for launching biomass as a efficient solution to the needs of European industrial and domestic heating. Valencia will pass of selling forestry burning chips, to exporting technology with a quality product and high added value.”

CPL Industries is committed to promote and launch from the Community UK market most black pellet production and biochar that Ingelia produce when the process of expansion and construction of a second reactor at náquera (Valencia) is completed, which will quintuple manufacturing to produce up to 2,500 tons of both products. Biochar and black pellet obtained after transforming 10,000 tons of garden prunings and agricultural residues from municipalities of Bétera and Náquera, at a minimum, is expected to process annually. The engineering division of Ingelia also will be responsible for directing the implementation process of new reactors that CPL Industries plans to install and operate, which will mean a medium term investment of 2.5 million euro. When the project will be completed in 2015, the two installed plants (the Náquera expansion and a second plant in England, with up to four reactors between them), will process 20,000 tonnes of organic waste -mainly agrícultural- will produce 7,000 tons of black pellet and biochar. Such production is estimated to generate an annual turnover CPL Industries for more than 2 million Euros.

The HTC Ingelia patented process was discovered by Friedrich Bergius in 1913. Subsequent research, published in 2006, were carried out at the Max Planck Institute in Berlin by Prof. M. Antonietti, who collaborate with Ingelia in 2007 and 2008. The technology took a definitive step in its industrial and energy applications when the Ingelia began working with the support of the Institute of Chemical Technology (ITQ) at the Polytechnic University of Valencia and CSIC, in a project led by Professor Avelino Corma, who was recently awarded with the Prince of Asturias Award for Technical and Scientific Research 2014.

Key characteristic of HTC system is that overcomes the main problem to transform organic matter into biomass-energy: moisture. Without drying, the patented process allows to naturally treat, valorize and transform agricultural waste into energy, as in Valencia, with pruning of citrus, vines or from the harvest of rice straw -avoiding problems generated by their burning- or even urban organic residue as gardening or rubbish.