The Regional Minister for Bioeconomy visited Ingelia´s installations in Nàquera 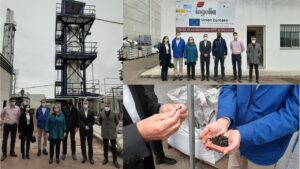 On April 15, the Minister of Sustainable Economy, productive sectors, trade and Labor, visited the Ingelia´s HTC plant in Nàquera. The minister was able to learn about the production cycles of biocoal from waste and the industrial technological development carried out by Ingelia. The next steps in the digitalization of the company and in its commercial deployment.

The Department of Sustainable Economy, Productive Sectors, Trade and Labor is the department of the Consell to which corresponds the exercise of powers in the field of sustainable economy; productive sectors, industry, energy; foreign trade; commerce, interior, sectoral fairs and promotional activities, crafts and consumption; as well as in matters of promoting the social economy; promotion of employment, occupational and continuous professional training and intermediation in the labor market.

During the visit, the values ​​that HTC technology brings to the economy in terms of circular economy, environmental protection, job creation and the promotion of the industry in new clean technologies were highlighted.