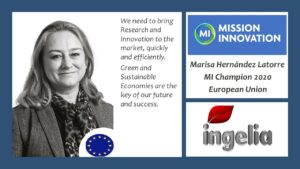 The European Commissioner for Innovation Mariya Gabriel has announced the Spanish María Luisa Hernández Latorre, European Champion of Mission Innovation Champions 2020. The Awards ceremony, which was scheduled to take place in Viña del Mar (Chile) was held in Brussels and was broadcast via streaming due to the COVID19 pandemia. On the 12th of June, the Commissioner of the Eurogroup Mariya Gabriel opened the ceremony and proclaimed the twenty-one champions representing the MIC member countries. The ceremony was moderated by Patrick Child, Director General of Research and Development of the European Commission, in which Renu Swarup, Minister of Science and Technology of the Government of India, Mohamed Ghazali, Secretary General of the Ministry of Energy of Morocco, Sebastian de Toro, Secretary of State of the Swedish Ministry of Energy and Henrik Asheim, Norwegian Minister of Research and Education also participated. María Luisa Hernández Latorre, champion of the European Union and Malak Alnory, champion of Saudi Arabia, the country that hosts the G20 this year, were in charge of conveying the message of acceptance to Mission Innovation Champions on behalf of the twenty-one champions.

Mission Innovation Champions is an initiative of the European Union and twenty countries, including Chile, Saudi Arabia, Korea, the United Kingdom, Canada, China, and Australia that seeks to recognize and celebrate the work of exceptional innovators and researchers who have developed his career to accelerate the clean energy revolution. The Mission Innovation Champions program draws global attention to the most promising ideas and seeks to facilitate engagement between award recipients and MIC governments, research institutes, affiliated organizations and private sector investors.

María Luisa Hernández Latorre is Founder and CEO of Ingelia, a company that operates in the circular economy sector and has developed its own technology to recover carbon from waste, applying it to the production of biomaterials in industry. Ingelia is a world leader in its sector, it has been granted fifteen international patents and it has built three industrial HTC plants in Spain, the United Kingdom and Belgium. María Luisa Hernández Latorre, has developed her professional career within the innovation sector, launching innovative companies in emerging sectors. She is an Industrial Engineer, Executive MBA and CE-Master in Financial Management and has received numerous international awards for innovation and sustainability, she is a founding member of WAS (Women Action Sustainability), an association of women managers with extensive experience in management, who seek incorporate sustainability to the boards of directors of companies as the axis of their strategy and development.